Could we be social distancing for eight months or more?

If we ease up on measures, transmission takes off again, according to model.

We’ve never required our society to do something like this before.

It was an email to a few dozen colleagues that has now spread to doctors nationwide. “This event is unlike anything we have lived through before,” Dr. Brent Wolfrom’s message began. “It is likely that at some point we will transition from an acute to chronic crisis mentality.”

Wolfrom is a family doctor and former medical officer with the Canadian Armed Forces who completed two deployments to Afghanistan. “I’m starting to equate so much of what’s going on now to my experiences over there,” he says over the phone from Kingston.

Stress, uncertainty, social isolation. Periods of crisis punctuated by calm. “The absolute lack of social interaction focused on anything other than the mission, and a lot of death,” says Wolfrom, postgraduate program director for family medicine at Queen’s University.

“We don’t know how all of this is going to shape up,” he says. The images from Italy of crematoriums that can’t keep up with the bodies, and army convoys escorting coffins out of devastated towns; the harrowing anecdotes of doctors forced to decide which life is worth saving more. “Quite frankly, it looks absolutely terrible,” Wolfrom says. “We’re all hoping it doesn’t happen here, but it’s possible.”

Long and dark days are ahead, he warned his colleagues in the message, published online this week by Canada’s top medical journal.

Just how many days is coming into unnerving focus.

Canadians may have to face 32 weeks of aggressive social distancing to prevent thousands of deaths — nearly eight months to keep intensive care units from being overrun with the sick and get us closer to when vaccination may be a possibility, according to outbreak modelling by researchers at the University of Toronto and University of Guelph.

“Aggressive social distancing for 32 weeks does act to slow transmission significantly and essentially flatten the curve,” says Dr. Amy Greer, Canada Research Chair in Population Disease Modelling at the U of Guelph.

Even if we were to ease up on the suppression strategies every four weeks or so — let people go back to work, reopen schools, put seats back in restaurants — community transmission takes off again, according to the model. Greer and her collaborators aren’t advocating for 32 weeks of social distancing. The attack rate — the total number of people infected in population — doesn’t change that much at all between all the various scenarios they looked at. Essentially, 60 per cent of the Canadian population becomes infected in a four-month window if we do nothing at all, or if we spread that 60 per cent — some 24 million Canadians — out over 18 to 24 months using social distancing. The peak comes later, the cases don’t come fast and furious and we get time to build extra capacity in the health system.

While it uses Ontario’s population as a case study, the model fits with a grim analysis by a top group at Imperial College London, a team led by prominent infectious disease modeller and epidemiologist Neil Ferguson who tested positive on Thursday for the very virus he’s modelling. Ferguson’s team predicts population-wide social distancing, home isolation of cases and school closures, will be needed for 18 months or more, at least sporadically, on and off again, to avoid a rebound in transmission that could kill two million Americans alone, until large stocks of vaccines are available.

The take away: The virus can’t be allowed to waltz, or churn through the population. Lives will be disrupted in “profound” ways, Ferguson says. Drastic suppression is the best option.

Not everyone agrees. Some are calling overkill. “The data collected so far on how many people are infected and how the epidemic is evolving are utterly unreliable,” Stanford University professor of medicine John Ioannidis writes in STAT.

But the modellers beg to differ. The Trump administration is making contingency plans for the pandemic to stretch up to 18 months or longer and cause multiple waves of sickness, according to a 100-page federal plan obtained by CNN. A Public Health England document seen by the Guardian warns the epidemic could last until next spring and see up to millions hospitalized.

Canada’s federal government said it is preparing for a surge in cases. Exactly when they anticipate that surge, they declined to say. Authorities are reviewing the science and the evidence, federal health minister Patty Hajdu said, “to figure out how we get out of this situation.”

Until they do, Ottawa announced it is mobilizing manufacturers to scale up production of ventilators, gowns, disinfectants, wipes, hand sanitizers and other critical supplies, including ventilators, N95 face masks, disease-tracking technology and rapid portable testing kits. Prime

Minister Justin Trudeau likened it to a wartime effort. The glitch is that Ottawa is competing with every other country to acquire many of the necessary supplies.

It was only two and a half months ago that scientists isolated and sequenced the virus behind COVID -19 “with lightening speed,” Tam said. This week, the first human being was injected with a live vaccine in the first clinical trial of a COVID -19 vaccine to launch. But it’s too soon to know what’s coming.

One of the most pressing unknowns is just how much community transmission is already happening. Human contact drives the pathogen’s spread. It’s believed every infected person goes on to infect two to three others. But without a better sense of how many people are infected, it’s difficult to know how many stealth spreaders are among us.

Tam said asymptomatic people don’t need to be tested, however studies this week suggest people can spread the virus without showing symptoms and seed an outbreak.

The virus may wane in the summer and resurface in the fall, the way seasonal flu does. But in pandemics, a second and bigger wave often follows the first. This week Wuhan reported no known new locally transmitted cases for the first time since the virus emerged from a wet market in southern Guangdong Province. Wuhan instituted a lockdown in the last week of January. An outbreak isn’t officially over until you go two, 14day incubation periods without new cases.

“Twenty-eight days from now, knock on wood, Wuhan would be able to declare the outbreak over,” says Dr. Ross Upshur, a bioethicist with the Dalla Lana School of Public Health and an expert on the ethics of responses to pandemics. “So, if you go from the last week of Ja

nuary to four weeks from today, that gives you the best case interval of bringing this under control.” 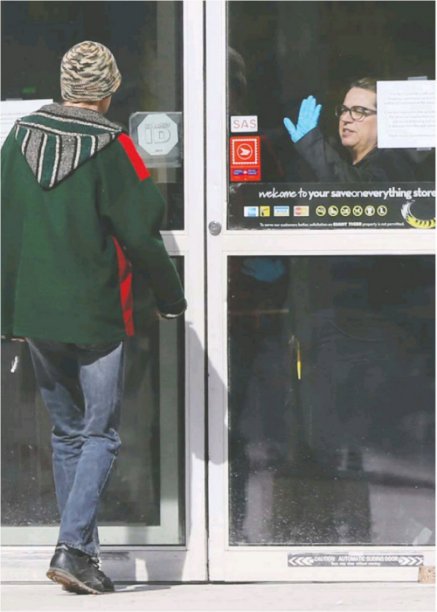 Wolfrom worries about the psychological fallout if our world is effectively shut down for months on end. An exacerbation of existing mental illness, and new mental illness that may come out of all of this. “We’ve never required our society to do something like this before.”