Strangely, the fallout from the COVID-19 pandemic could have a long-term effect on Prince Edward County’s wine industry. 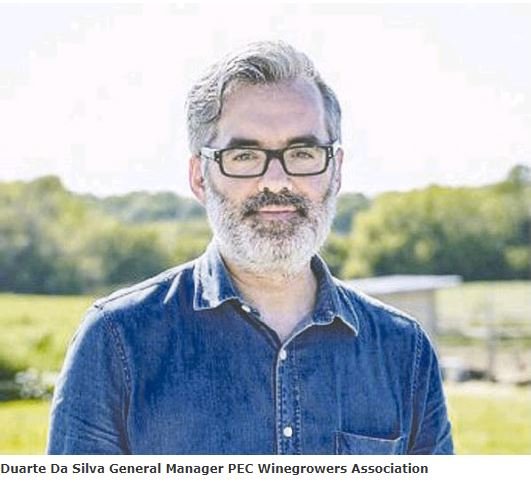 When Prime Minister Justin Trudeau announced Canada’s borders would close in an effort to reduce the spread of the novel coronavirus, thousands of foreign agriculture workers were stranded at home.

Many of those workers were headed to Prince Edward County to work in the wine and fruit industry.

Duarte Da Silva, general manager of the Prince Edward County Winegrowers Association, said if the workers are denied entry into Canada for long, it could have longterm effects on the local industry.

“It’s not just this year, but potentially it could be a real long-term issue because if the plants aren’t cared for properly this spring, the wines could have problems bearing fruit for years to come,” he said. “I would estimate there is probably somewhere in the neighbourhood of 150 workers for approximately 40 wineries and they are very much needed.”

Da Silva said most of the wineries depend on the expertise of the migrant workers they employ each summer.

“I guess some people just look at the foreign workers simply as labour, but they are so much more than that,” he said. “Most have been coming year after year and are very skilled. When they come, they can accomplish so much because they’ve been working with the same people every year and they know the particular operation where they work.”

Jim Hughes is a fifth generation fruit grower in southern Prince Edward County, in Waupoos. He operates the Blueberry Patch and grows raspberries and apples as well.

“We usually have seven offshore workers and at this time of year they are pruning apples as well as the blueberries and raspberries,” he said. “They help with any planting of vegetables we might do and they help maintain the crops until they’re ready for harvest.”

Hughes said his operation is relatively small and he is fearful for larger operations in the province.

“We have Algoma Orchards in the Pickering area and Knight’s in Colborne and this could be really difficult for operations like that,” he said. “They have hundreds of acres (of trees) to prune and it will affect them very much.”

Both Hughes and Da Silva are confident the workers will be allowed to enter the country soon and are eager to learn what regulations the federal and provincial governments will put in place for quarantines.

“Each of the wineries houses their own workers, so they will be able to quarantine them for two weeks if that’s what’s required Da Silva said. “We don’t know what that would mean in terms of them working, but going back to their skill level, if they were out in the vineyard pruning the plants they certainly don’t need instruction and can easily stay a safe distance away from other people. We’ll just have to wait for direction on that though.”

Hughes said he is hopeful it is sorted out soon.

“I saw on the television last night where the Holland Marsh, where a lot of early summer vegetables like broccoli are produced, and the peach industry will really be affected by this,” he said. “It’s a big concern because this could have a big affect on our food supply in Ontario.”

Bay of Quinte MPP Todd Smith, who serves as Minister of Children, Community and Social Services, said both levels of government are working hard to clear foreign workers for travel to Ontario and other provinces.

“There’s about 19,000 (foreign workers) in Ontario’s agricultural sector each summer and most of them have not been able to come,” he said. “We’ve been getting some mixed messages from the (federal government) on this because Bill Blair, who’s in charge of border security said the temporary foreign workers would be allowed to come in but would have to self-quarantine for 14 days upon arrival. Apparently when it got to cabinet that night there was more discussion on it and it hadn’t been passed.

“I know in Prince Edward County if they don’t get their vines dug out and ready, they could potentially lose their whole crop of grapes.”

“With the travel restrictions in place, I’m not sure how they would get here even after they’re permitted to come,” he said.