Belleville, ON, Canada / Quinte News
Alana Cameron
Work is finally beginning on the new Catherine Street foot bridge in Belleville.
The bridge, which spans the Moira River and connects Catherine Street to the downtown, was shut down a few years ago due to rapid deterioration.

Project Manager Karpik Suresh says the contractor is currently onsite preparing for in-water work in the Moira River which will begin July 15. 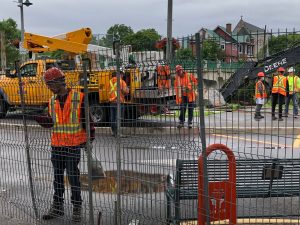 Work will occur over two years with the bridge being demolished and the sub-structure work being completed this year.
Suresh says one of the requirements of the in-water construction work is to improve the habitat so that fish in the area can thrive.

“So that will also be done as part of the project where we’re gonna be replacing about 20 metres of shoreline around the bridge to improve fish habitat so that it’s better for the environment.”

Suresh says care will also be taken to make sure no construction debris enters the riverbed.
Audio Player

“Basically in the locations where the underwater work needs to be done, we are gonna bascially build, like, a coffer dam to detour the surface water so that it’s gonna be done in kind of a dry area and the water’s gonna be, like, detoured towards the side.”

He says they will also measure the amount of debris in the river before, during and after construction to make sure the river stays in good condition.
The approximately $3.5 million project is expected to be completed by November 2022.